“It was a good experience,” heavyweight Davion Franklin said of his Bellator 264 fight against the previously undefeated Everett Cummings.

It was also a short one.

Mixed martial artists aren’t exactly paid by the minute, and Franklin made sure to get things over with quickly on Friday. His knockout of Cummings came in just 21 seconds — almost too quick, he told media outlets backstage at the Mohegan Sun Arena in Uncasville, CT.

“I was hoping it would last a little longer,” Franklin admitted, noting that he was “waiting on my moment. I like to slam people, and I didn’t get to slam him. So, next time.”

Franklin improved to 4-0 with the win, and while he’s willing to fight anyone as his career progresses, he has a singular focus. Which means he doesn’t care much about being the first man to defeat Cummings. “I’m chasing the title. I don’t care about somebody else’s record. I’m here to win the belt. And it’s going to happen.”

Ryan Bader currently holds the heavyweight title in Bellator; while the champ is tied up in the light heavyweight grand prix, Valentin Moldavsky has claimed interim gold. Franklin had a message for “Darth” Bader: “Keep it warm. Don’t lose to Moldavsky.”

Jake Hager was another name thrown Franklin’s way following his win on Friday. Like Franklin, the AEW pro wrestling star and former collegiate wrestling standout is undefeated. Franklin had his own flirtation with pro wrestling in the past, having tried out for the WWE.

Asked if he would ever give pro wrestling another shot, given Bellator has been open to fighters juggling careers, Franklin said only that “right now, I’m just focused on winning that title.” 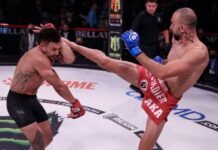 Regardless of Gegard Mousasi’s Beliefs, Austin Vanderford Plans to Do Damage on Top in Title Fight

Lupita Godinez to Fight Luana Carolina at UFC Vegas 40, One Week Removed From...