After their original date fell through last month due to COVID-19 protocols, Miles Johns and Anderson dos Santos finally got to throw down at UFC 265.

In a way, the delay was an upgrade, with the fight moved from a Fight Night event to a Pay-per-View card, albeit on the early prelim portion.

The fight turned out to be worth the wait. Most certainly for Miles Johns.

After a glove touch, both fighters took the center of the octagon. A high kick from dos Santos was blocked. A calf kick from Johns raised dos Santos’ leg. Johns landed a leaping punch and ate a leg kick. Next, Johns landed a left kick. A third calf kick dropped dos Santos. Both fighters landed power shots. Less than two minutes left in the fight, and dos Santos’ leg was compromised. With Just over a minute left, Johns shot for a takedown, but nothing came of it. The last-minute saw little action.

Between rounds, dos Santos told his coach that his leg was done. Which was frankly apparently to anyone watching.

Dos Santos shot for a takedown to start round two, but could not land the attempt. Johns however landed a nasty combo that hurt dos Santos. Dos Santos landed a knee that hurt Johns, but Johns countered with a hook. Next, Johns landed a heavy left hand which made dos Santos shoot. Another leg kick from Johns and dos Santos hit the floor. John landed a body shot and made dos Santos shoot yet again, but Johns was too quick. 90 seconds left in the round, and dos Santos put his hands behind his back to taunt Johns. The gamesmanship appeared to be an attempt by dos Santos to lure Johns in, rather than put more pressure on his leg. No dice. John started to attack dos Santos’ other leg with less than thirty seconds left. The round ended with dos Santos creeping forward.

Round three started with a hug, and then they got back to it. One minute into the final round and Johns landed the knockout blow. Johns first landed a shot to the body, and a right hand  over the top sent dos Santos out.

Beautiful knockout! That is two knockouts in a row for Johns, who has rebounded well since his first professional loss. 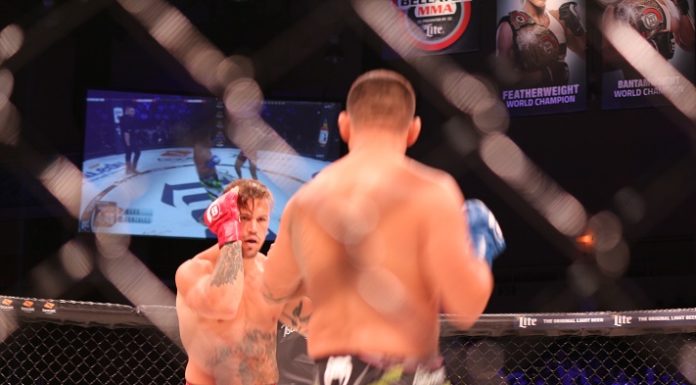