A million dollars. A world title. A grand prix tournament victory. Legacy. Plenty was on the line in the Bellator 263 main event on Saturday. What promised to make the fight great, however, was something else: Patricio Pitbull and A.J. McKee just plain didn’t like each other.

McKee had been hounding the champ for years. Since his arrival in 2015, “The Mercenary” had been the golden child, promoted as the future and living up to just that every step of the way. Seventeen steps in total, up to Saturday night. 17-0 to start the night.

Pitbull, well, he’d been the most dominant fighter in Bellator history. Not undefeated, not perfect, but always finding a way to win when it mattered. Early career losses to Joe Warren and Pat Curran were long forgotten by the time Patricio “Pitbull” Freire knocked out Michael Chandler to claim a second title.

McKee had stated ahead of the fight that he’d make the champion come to him, rather than play into the counters of Pitbull. Early, McKee fired a kick, then settled back at center. Two more leg kicks would follow, but McKee was indeed patient, at least until he fired a higher kick that was almost caught. Pitbull then fired a kick of his own. Through the opening minute and a half, not a single punch was thrown.

Then, in a flash, McKee landed a head kick. Pitbull was in serious trouble. McKee swarmed with punches, Pibull went down, and A.J. McKee celebrated — prematurely. Pitbull got back up, dazed but still in it. Not for long. McKee locked on with a guillotine choke, and fired a knee before cranking it. Pitbull’s hand slumped, he appeared to go out, and the referee made the call. A technical submission win for A.J. McKee.

What transpired at Bellator 263 was destiny arriving, if you believe in such things. A.J. McKee, improving to 18-0 is almost certainly the biggest prospect in MMA since Jon Jones, and he’s still growing as a fighter. The single mistake he made against Pitbull, celebrating his victory too soon, will be one he will not make again. In the meantime, he takes home a million dollars, the title, and may now be eyeing Patricio Pitbull’s other title. 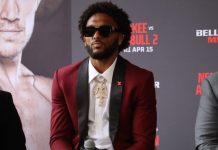 Bellator 286: A.J. McKee Says “The Resurrection Is Here” Ahead of Lightweight Debut