It has been almost two years since Kang has been in the octagon. He last fought against Liu Pingyuan in his hometown of Busan, South Korea, back in 2019.

“I had some life changes after my last fight. I got married, so I did take some time off to prepare for that. I did have another fight booked, but then it got canceled because I got an orbital fracture,” Kang told Cageside Press through a translator on Thursday.

The South Korean did say that while the global pandemic made training a little bit hard with adjustments and delays, he did say that he was training during 2020.

Kang is on a three-fight win streak with wins over Pingyuan, Brandon Davis, and Teruto Ishihara. Next, he faces UFC veteran Rani Yahya in the co-main event of the evening. This will be Kang’s first UFC co-main event, and because of that, he is just a little nervous.

“Obviously, because I am the co-main event, there is a lot more attention with my fight, so it does make me a little nervous because of the pressure, but I’m great. I love it,” Kang said.

Yahya is coming off a submission win over Ray Rodriguez back in March. 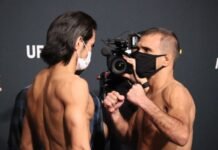 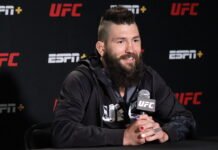 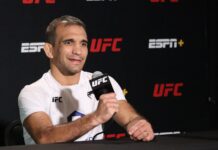 UFC Vegas 33: Rani Yahya Says He Is In The Co-Main Event For A Reason