Bellator 265 has added a heavyweight affair to its preliminary card.

On Tuesday, a source familiar with the situation confirmed to Cageside Press that Bailey Schienfelder will face Kevin Childs on the South Dakota card. The event will be the second of 2021 to take place outside the confines of the Mohegan Sun Arena in Uncasville, CT, following this weekend’s Bellator 263 card in Los Angeles, CA.

Schoenfelder (1-0), fighting out of Huron, South Dakota, won his pro MMA debut back in May at LFA 108 against James Munhoz. A former linebacker for the University of Minnesota Minnesota Golden Gophers, Schoenfelder is looking to become the latest football to MMA success story.

Kevin Childs (1-1) earned his first win as a pro earlier this year as well. The 26-year old had a multi-year amateur career prior to turning pro in 2020, and has also taken a pair of boxing bouts in recent years.

Bellator 265 takes place Friday, August 20 at the Sanford Pentagon in Sioux Falls, South Dakota. Another heavyweight showdown has been slotted in as a the main event, as Cheick Kongo will go up against Sergei Kharitonov. Also on the card, what has been billed as a featherweight title eliminator sees Adam Borics take on Jay Jay Wilson. 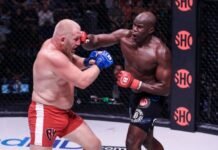