The battle of candy vs. soda was set to be settled on the UFC Vegas 32 main card on Saturday.

Adrian Yanez and Randy Costa, in the build-up to the fight, had one of the most memorable, good-natured “feuds” in recent memory, as each backed their respective favorite brand of sugar delivery system. For Costa, that was Reese’s, while Yanez took the side of soda pop fave Dr. Pepper.

Getting right to work, Costa flashed his jab and fired a head kick, then changed targets and fired at the body. Switching stances, he sneaked a kick back up high to the other side. Really interesting looks from Randy Costa early in the bantamweight scrap, which seemed to give Yanez some trouble. Team Dr. Pepper fired back with a low kick, but Costa was landing his jab at will. Yanez was bloodied, his head snapping back again and again. Round one was clearly Costa’s, and while Yanez had a few moments, they paled in comparison. Reese’s was in the lead heading to the second, and Costa even landed a head kick in the final minute.

Adrian Yanez appeared to adjust early in the second, his movement a little better. He pressed forward, but Costa’s jab did hit home once again. Yanez, however, began double-pumping his jab, and backed Costa up to the fence. There, he caught Costa with an uppercut, dropping him! Costa fell to his knees, but managed to cover up, trying in vain to avoid the follow-up strikes that were raining down on him. A moment later, the ref waved it off, and Dr. Pepper had the W.

Solid fight from both men, with Yanez landing that punch perfectly for the comeback victory. He extends his win streak to seven with the win. 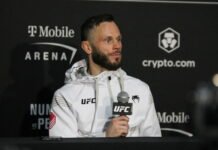 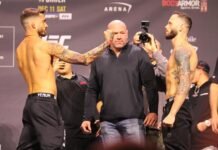