Las Vegas, NV — In her return fight, Aspen Ladd is not looking to go to decision, and wants to get back to her finishing ways.

Ladd (9-1) is returning to the octagon for the first time since December of 2019. While she was training for a fight with UFC 265 title challenger Juliana Pena in March 2020, she tore her ACL and MCL, putting her out of action. For someone who loves the outdoors, being sidelined was tough.

When Cageside Press asked how she kept sane, she simply said, “I didn’t.”

Ladd continued, saying “There was a six-week period there where I could barely do anything. I had physical therapy and that was about it. My first mile took me 50 minutes with a big brace on and I was trying to remember how to walk again. Oh, it sucked. It was bad.”

While many people would take the time to catch up on a TV show or some movies, Ladd was solely focused on her physical therapy and wanting to get back to fighting as soon as possible.

“So, my life was basically, like, you know when training for fight camp and you’re all in? That was the approach to physical therapy for me. So I had that to focus on all the time and plus it was just trying to learn how to walk and relearning everything so that I could get back,” Ladd said.

Ladd puts her No. 3 bantamweight ranking on the line when she faces No. 9 Macy Chiasson. She is looking to get a finish, something that she has does in seven of her nine wins.

“I don’t think anyone goes out there and is like ‘oh I was a decision.’ Nobody wants a decision. So anything but that… hopefully, a finish, but we’ll see. 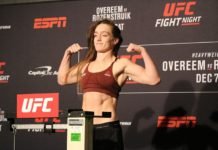