Given the winner of Dustin Poirier vs. Conor McGregor 3 was likely to face “Do Bronx” next, it made sense that the lightweight champ was on hand Saturday night in Las Vegas.

Speaking to media outlets including Cageside Press, Oliveira was asked how things have changed since winning the title earlier this year against Michael Chandler. “Having fun. I’m enjoying my life. My life did change 100% since that, but I know I’ve got to keep my mind on focus,” replied the champ.

What’s interesting now is that Oliveira is finally being offered the fights he’s asked for for years. “Life is crazy, because I did ask for this fight before. But now I’m the champion, they are asking to fight me. And I’m here for that,” he said. “Hopefully I’m going to fight in December. Let’s see.”

Speaking to the media prior to the UFC 264 main event, Oliveira didn’t have a horse in the race, so to speak.

“I don’t have any preference,” said Oliviera, predicting a Conor McGregor win. Of course, that didn’t happen, with McGregor breaking his leg in the opening round of the rubber match with Poirier. “But for me, it doesn’t matter. I never choose an opponent, I’m going to fight whoever wins this fight.”

Oliveira was dressed in style on Saturday, and he admitted that it was done with his championship image in mind. “I bought this jacket for tonight because I’m the champion, and I’ve got to be handsome,” he exclaimed.

Watch the full media appearance by Charles Oliveira at UFC 264 in Las Vegas above. 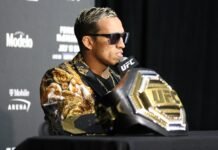