A pair of highly touted UFC bantamweight prospects will collide in September.

Multiple sources, speaking on condition of anonymity, have confirmed to Cageside Press that undefeated Welsh fighter Jack Shore will fight Said Nurmagomedov on September 4 when the UFC returns to London.

Shore (14-0) was actually supposed to compete in London against Geraldo de Freitas before the global pandemic shut down the sports world. “Tank” went to the judge’s scorecards for the first time in his career in his last fight against Hunter Azure, winning a split decision. In his second fight inside the octagon, and only fight in 2020, he submitted Aaron Phillips at UFC Fight Night: Kattar vs. Ige on ‘Fight Island.’

Nurmagomedov (14-2) only fought once in 2020, but it was a good one. He knocked Mark Striegl out in just 51 seconds on ‘Fight Island.’ The Russian fighter is 3-1 in the UFC, with his only loss coming against Raoni Barcelos.

A win for either fighter will surely get them a top 15 opponent next.

Though not officially announced, the UFC is expected to return to London for their September 4 event. 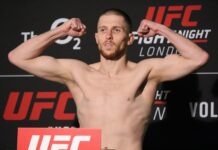 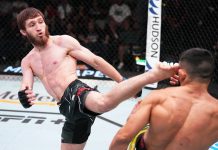