ONE Championship’s Adriano Moraes shocked UFC fans when he knocked out Demetrious Johnson earlier this year.

It was the first time the man known as “Mighty Mouse” — a leading candidate among the GOAT debate — had ever been stopped.

UFC fans may have been shocked, but for those who regularly follow MMA in Asia, where ONE Championship holds a position not unlike the UFC, it was far less of an upset. Moraes (19-3) is a multi-time ONE flyweight champ, who also held gold in Shooto Brazil.

“Of course it changed a little bit, you know,” Moraes told Cageside Press when asked how life had changed since the win. “I got more recognized with the fans. But in my life, nothing changed. I’m an everyday guy who likes working hard, leading my lifestyle, helping people.” Of course, when you have a victory against a legend like Demetirous Johnson, Moraes added, “life always brings something special.”

The entire experience, from the travel, to dealing with COVID-19 protocols, to the fight, was something that Moraes called “graceful.”

Ahead of the fight, Moraes actually got support from none other than Gamebred himself, Jorge Masvidal. In fact, Masvidal told the ONE flyweight champ about just how effective a knee strike can be.

“Yeah, he told me. He told me ‘hey Adriano, knees can change lives, man. I believe in you, and I see you every single day in the gym working hard.'” Despite Masvidal being friends with Johnson, he told Moraes that he believed the Brazilian could get the W. In the end, it was a knee that helped get the job done against “Mighty Mouse.”

“Receiving that advice from him was amazing. After the fight, what he said to me was really inspirational, and [made me] be proud of myself,” Moraes told us.

As ONE continues to work towards western expansion, Moraes believes it will be “really good” to fight stateside. But that said, “for me, I don’t care where it’s going to be. Everybody that knows me, they know I don’t care about it. It can be in America, Brazil, Asia, I don’t care.”

What comes next is now the question. Yuya Wakimatsu has put together a four-fight win streak since losing to “Mighty Mouse” in 2019, but Moraes sees another old foe ahead of him.

“I don’t think Yuya Wakimatsu did a good job against Reece McLaren. I think you have Kairat Akhmetov in front of him. I think I have some issues to resolve with Kairat Akhmetov, because it’s one and one right now, I think you have the trilogy,” he suggested. If not that, “Maybe I can try the shot for the bantamweight belt against Brazilian superstar Bibiano Fernandes, if they allow me to do that.”

Or, added Moraes, “maybe I can drop a weight class, go to strawweight, and try to get another belt against ‘The Passion’ [Joshua Pacio].”

In short, there are a lot of options that interest Adriano Moraes. “I’m here to do business. Maybe a boxing match against [Vasyl] Lomachenko, he just won a good match right now, last weekend,” the Brazilian suggested. “I wish I could fight boxing against him. A boxing match would be fun, right? I’ve showed everybody I have hands too. I know he has hands, of course he’s a professional boxer. But we have almost the same record. I wish I could fight against him in a boxing match inside the ONE ring. Why not?”

Watch our full interview with ONE flyweight champion Adriano Moraes above! 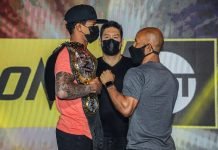 ONE on TNT 1 Live Stream and Results

ONE on TNT 1: Can Moraes End the Era of Mighty Mouse on the Big Stage?