Another week, another installment of The Ultimate Fighter 29. Off the jump, Team Volkanovski were not fans of Brian Ortega’s attitude at the end of the previous TUF 29 outing. That much was made clear in the opening of episode five, entitled “Hard Headed.”

That led to one of Ortega’s fighters, Andre Petroski, sticking up for “T-City,” calling him a genuine guy (if you missed, it, Ortega showed up late to the set in the previous week’s episode, then proclaimed that champ Volkanovski and his crew were “on my time.”). Team member sticks up for coach, news at 11. Cue a few minutes of squabbling and name-calling, mainly with bantamweight Mitch Raposo speaking up.

At least that didn’t last long. Then it was on to fight prep. As is way too common when it comes to the coaches in many seasons of TUF, the assessment from Team Volkanovski of Bryan Battle’s opponent was “the only chance is landing a big shot, so we can’t be there.” That seriously downplays Kemran Lachinov’s abilities.

Speaking of, we’re off to meet Kemran and his family, who reside in Massachusetts. Lachinov has a heck of a background — a Turk born in Uzbekistan who then moved to Russia, and later to America for high school.  If things go his way on TUF 29, he’ll be traveling a lot more in the next few years.

Lachinov, who had already found success in Bellator earlier in his career, is the more experienced fighter this week. Brian Ortega adds that he’s the “tougher of the two.” Let’s not sell Battle short though. Working as a carpenter alongside his training, it’s early mornings and late nights for Battle. And while he’s competing at middleweight, Battle started his career as a heavyweight.

Come the fight, Battle used his control to win positional battles. Between rounds, with their fighter down, Brian Ortega urged Lachinov to “Work that body, he has a soft body. Then I want you to get that chin.” It didn’t happen. Instead, Battle took his opponent down in the second, controlled him, and ultimately won a unanimous decision. Lachinov should grit, eating a clean head kick, but taking shots doesn’t win fights.

Up until now, The Ultimate Fighter 29 had been all Ortega in the cage. After episode nine, Volkanovski is on the board. That will likely lead to a little more friction between coaches next week. 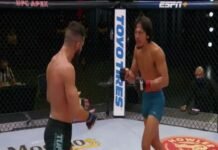 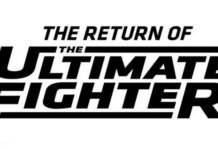 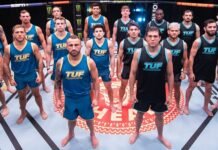