With South Korean legend Chan Sung Jung (The Korean Zombie) topping the UFC Vegas 29 card on Saturday, it was no surprise to find his compatriot Seung Woo Choi in action as well. A fellow featherweight, Choi was booked opposite Julian Erosa in main card action.

On paper, this fight had fireworks written all over it and it sure delivered for as long as it lasted.

Both fighters took the center of the octagon and Choi threw a hard right hand. Choi landed two very crisp right hands and Erosa ate it. Erosa threw a right hand back. Choi blocked Erosa’s high kick. Choi threw a right hand, followed by a left hook that dropped Erosa. Choi pounced on him immediately and put him away, causing referee Mark Smith to halt the fight.

The win was nothing less than a very impressive performance by Choi. After losing his first two UFC fights, Choi is now riding a three-fight win streak with wins over Suman Mokhtarian, Youssef Zalal, and now Erosa. A big fight will likely be coming his way next.

Erosa had his three-fight winning streak snapped and lost for the first time since returning to the UFC. 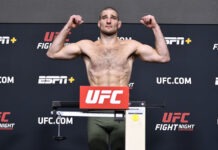