Having signed with the UFC a few years back, middleweight Bruno Silva had essentially waited two years to make his octagon debut, thanks to a USADA suspension. On Saturday, he finally got his chance to make a first impression at UFC Vegas 29, where he was booked opposite Wellington Turman.

In what was simply a dominant performance, Silva, a.k.a. “Blindado,” sparked his opponent in the opening round.

Turman shot in on a single leg early in the fight, and turned towards the back of Silva. Turman did dump Siliva to the mat and jumped on his opponent’s back, but Silva immediately escaped and took control. Brazil’s Turman got right on the back again and kept dumping Silva to the mat briefly. Turman even jumped on the back standing but Silva escaped out of the back door. That allowed him to get on top. With roughly a minute left in the round, Silva began unloading with some nasty ground and pound from the guard. Silva, with only seconds left, landed five huge ground punches putting Turman out cold.

A clearly elated Silva celebrated the victory by hoisting his coach in the air. Quite the introduction for the Brazilian middleweight. 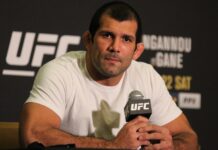 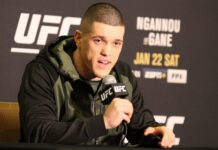 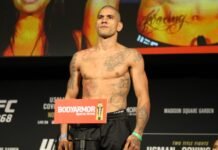