Rory MacDonald was a sure thing to make the PFL post season heading into Thursday’s PFL 5 in Atlantic City.

Opponent Gleison Tibau, on the other hand, needed to secure a finish prior to the end of the second round in order to clinch a playoff spot. That’s thanks to Magomed Magomedkerimov coming up with a huge Ezekiel choke win over Curtis Millender earlier in the evening.

In the end, it was “The Red King” moving forward when all was said and done. But some questionable judging arguably cost MacDonald the fight.

Early on, MacDonald had a clear edge, though a nasty-looking eye poke halted the action, with Tibau, the victim, clearly in pain and clutching at the fence to steady himself. Tibau, however, managed to push onward after a short break. Only to contend with and at times appear ill-equipped to deal with MacDonald’s range — and his submission game.

While MacDonald couldn’t secure a choke after mounting the Brazilian’s back, he did battle it out with Tibau and push the fight into the third round. By that point, it was too late for Gleison — and Magomedkerimov was assured of a playoff spot.

MacDonald, of course, was already a lock for the post-season. But he also looked set to take home the victory in a fight that would, were it not for the judging, be remembered for a number of eye pokes, with both fighters guilty of the foul. Tibau’s power was evident at times, but he was ultimately unable to connect when it mattered; MacDonald’s lateral movement and speed were just too much in the end.

The judges, however, felt otherwise. In a fight that seemed to favor MacDonald in every category, a split decision was handed down, with Tibau the winner. Without enough points to make the playoffs, however, he will go home — while MacDonald, arguably robbed of the win, at least moves on to the playoffs. 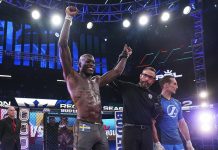 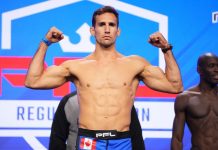