One of the most prominent fighters out of Canada and a teammate of Georges St-Pierre at TriStar gym, MacDonald (23-10-1) was once considered the heir apparent to “Rush.”

As is often the case with MMA, things did not quite work out according to plan. But “The Red King” fought in one of the most memorable UFC title fights of all time against Robbie Lawler at UFC 189 in 2015, and after signing with Bellator, would claim that promotion’s world championship at 170lbs.

MacDonald twice defended his title in Bellator, retaining the belt in a draw against Jon Fitch, and winning a decision over Neiman Gracie before losing the championship to Douglas Lima in 2019 — the man he had dethroned a year earlier.

Later in 2019, Rory MacDonald signed on with the PFL, expecting to debut in the league’s 2020 season, only to see it cancelled due to the coronavirus pandemic. Instead, in both 2021 and 2022, he made it to the semifinals, only to be eliminated on each occasion.

This past Saturday, MacDonald was upset by short-notice opponent Dilano Taylor, who finished off the Canadian via TKO inside of a round.

MacDonald announced his retirement from the sport following Saturday’s defeat at PFL 8 in Cardiff, Wales, posting the news on social media.

“My time has come to put the gloves down for good. I’m so thankful for this sport and every person I’ve been able to meet along the way,” MacDonald began his statement, which you can read in full below.

My time has come to put the gloves down for good. I’m so thankful for this sport and every person I’ve been able to meet along the way.

I started this sport as a 14 [year] old kid, I still remember my first day and knowing this is what I wanna spend my life doing. The passion for martial arts and becoming a pro MMA fighter gave me hope and a way to a better life! And I’m so thankful to God for putting that gym Toshido MMA in Kelowna in my path. It truly changed the direction of my life and saved me!

What an adventure this career has been, 17 years of professional fighting. It all came and went so fast! So many painful trainings that are etched into my being, travelling to all parts of the planet and meeting so many people.

I’ve learned so much about myself through this career, not all of it good. And I’ve made so many mistakes along the way, but here I am 33 yrs old a better man because of those mistakes, to which I’m very grateful I’ve grown up lol

I wanna thank all of my fans that have been so supportive, I never got into the sport for fame or any acknowledgement and its been hard adjusting to attention like that but I am truly thankful for your kindness you’ve shown me!

Thank you to all my friends and family that have went out of there way to help me live out my dream of fighting at the highest level of MMA, thank you for believing in me, and caring so much, you’ve been so generous and I love you you all.

Thank you to the UFC, bellator, PFL for the opportunity to fight on the world stage
and all the staff of those organizations, you’ve all be really cool [people] to hangout and work with, sorry you had to put up with me being cranky and needy most of the time we spent together

Thank you to my coaches and my training partners and managers! 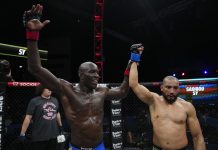