Heavyweight action is the latest addition to the quickly growing UFC 266 card in September.

On Tuesday, MMA Fighting was first to report that recently victorious Jairzinho Rozenstruik would return to action to take on daunting wrestler Curtis Blaydes. It’s a classic striker vs. wrestler match-up between two heavyweights firmly entrenched in the top ten of the weight class.

Earlier this month, Rozenstruik (12-2) knocked out Augusto Sakai in the final second of the opening round of their main event scrap at UFC Vegas 28. The kickboxer for Suriname is 2-2 across his last four, having dropped fights to Francis Ngannou and Ciryl Gane, while taking home an additional win over ex-champ Junior Dos Santos.

Prior to the loss to Ngannou, Rozenstruik had been undefeated in his mixed martial arts career.

Curtis Blaydes, meanwhile, had a four-fight winning streak derailed when he was knocked out by Derrick Lewis back in February. Lewis appears to be circling a title shot, while Blaydes will no doubt hope to jump right back into the thick of the title hunt.

UFC 266 does not yet have a venue or location officially announced. The Pay-per-View event is expected to take place September 4, 2021. The card as reported to date includes the following bouts:

UFC 266 to Feature Volkanovski vs. Ortega and Shevchenko vs. Murphy 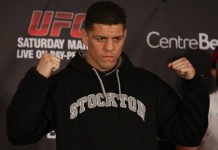 Nick Diaz vs. Robbie Lawler II In The Works For UFC 266 Co-Main Event