Glendale, AZ — After what seemed like an eternity, Leon Edwards was back in the octagon for a full fight on Saturday at UFC 263. There, she picked up the biggest win of his career when he defeated fan favorite Nate Diaz.

“It’s been a long, long two years. I was happy to come back and compete against a guy like Nate,” Edwards said at the UFC 263 post-fight press conference.

The English fighter dominated most of the fight but in the last round, Diaz connected on a perfect punch that hurt Edwards.

“I was rocked. Not enough to go to my knees and get ground n’ pounded out. But I felt that. I didn’t know what he hit me with until after the fight. It was a clean shot. I got complacent, I thought there was only a minute and a half left, let’s just go with the flow of the fight. And I paid a price. That’s a lesson. I’m still learning, I’m 29 years old. I’m still growing,” Edwards said.

UFC President Dana White has said that former title challenger Colby Covington is next in line for the title shot but Edwards doesn’t agree. He has a very salient point.

“I feel I should be next for the title shot. That’s nine in a row, ten in a row. There’s no one else that’s doing what I’m doing. I offered to fight everybody. Khamzat, Diaz, Belal. These guys aren’t even in the top ten. I’m the one that’s saying yes. Everybody else is bitching, and sitting out and complaining. I’m the one that’s showing up and fighting these tough guys. I deserve the next shot for sure,” Edwards said.

He continued and made the case why he should leapfrog Covington.

“All these guys are making excuses. They know I’m the real deal. They know I’m the man for the title shot. They’re all bitching and making excuses, saying he doesn’t deserve it. Then who f*cking does? Colby don’t deserve it. Woodley got injured, and now he deserves a title shot? I didn’t bitch, I didn’t moan, I took my loss on the chin and worked my back up to a nine-fight win streak. Who else f*cking deserves it?”

Jorge Masvidal Out of UFC 269 Fight Against Leon Edwards 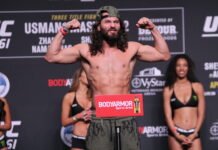