Hannah Guy made her Bellator debut last Friday at Bellator 259, and she upset -575 favorite Valerie Loureda. She would defeat the 22-year-old via unanimous decision, bringing the undefeated streak of the social media darling to a screeching halt.

During the build-up to the event, Loureda was heavily marketed, with Guy getting little to no promotion at all. While that might make other fighters feel disrespected, Guy understood why. However, there was something that bummed her out.

“I mean, I understood because she has been in Bellator since her debut, and she makes them a lot of money, I’m sure, so I wasn’t really that mad,” Guy said in an interview with Cagesidepress. “It did kind of get on my nerves, um, like – I don’t follow my opponents on social media until after the fight, and so a friend of mine was scrolling and saw a picture of just her on the poster. It said Loureda and Guy, and it was just her, but they didn’t send me a poster with just me.”

“It sounds silly, but it got under my skin a little bit, but other than that, like I understand it’s a business and whatever, but I am a little irritated that nothings been posted about me on their page. I am irritated about that and the rankings, but it is what it is.”

Guy was alluding to the updated Bellator rankings that came out this week. She cracked the top 10 flyweight rankings at No. 9, but she was still behind Loureda. Puzzling.

There was a bit of shuffling in the Official #Bellator Rankings this past weekend after #Bellator259. pic.twitter.com/yXpGLKBcp8

Again, she said she somewhat understands but had a different idea of what should have happened.

“It is just a little weird, I mean I do understand it’s like a business, whatever, but that makes ya’ll look kind of shady, honestly. Like it makes you look pretty bad. So I don’t know who came up with that list, but I feel like it was a good move – like they were better off maybe dropping her down one ranking and not putting me on the list at all, really,” Guy said. Maybe they saw people like me, whatever; I don’t know. Honestly, I would have felt better if I never got ranked. She could have stayed where she was, I guess or gone down one and me just not be on the list. Whatever.”

As for what’s next for Guy, she wants to get more cage time. “The Hurricane,” said she would like even to take a kickboxing or boxing fight so that she can work on her stand-up and get more comfortable. She also mentioned combat jiujitsu.

Check out the rest of the interview above with Hannah Guy, where she talks about her performance at Bellator 259, how she celebrated, driving into a hurricane, why she stopped school, and more. 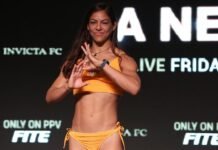 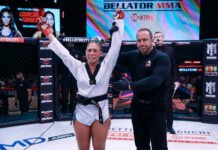