“He likes to refer to me as Paige VanZant’s boyfriend, but you know, I am happy to remind him that he’s also Leon Edwards‘ little brother. Fabian is my next toughest opponent, and I’m ready to go out there and put my hands on him. He has it coming.”

That was Austin Vanderford (10-0), who returns to the Bellator Cage this Friday at Bellator 259. He faces Fabian Edwards in a pivotal middleweight fight. Both fighters are top-five ranked fighters. Vanderford is No. 3, and Edwards is No. 4; a victory will set them up with a No. 1 contenders fight for a crack at the middleweight title.

Vanderford is commonly referred to as Mr. VanZant or Paige’s husband because he is married to ex-UFC fighter and now BKFC boxer Paige VanZant. He has gotten used to it, and he doesn’t let his opponents try to use it to get under his skin.

“I know I’m going to get that the rest of my career. Being associated with Paige and being her husband, and you know, but I can deal with it. I got thick skin,” Vanderford said. “It doesn’t bug me. Honestly, it’s kind of funny, and it makes me laugh. I like to roll with it and have fun. I’m a light-hearted guy, you know.”

“I grew up in Alaska and grew up with a lot of older friends and siblings who liked to pick on me a lot. So, it’s easy for me to let things roll off my shoulder. I don’t take the internet too seriously or what people say. I’ve got my people close to me who, you know, those are the people I care about, and I care what their opinions are. But yeah, I can roll with all of the jokes. Keep them coming,” Vanderford laughed.

“The Gentleman” only fought once in 2020, but he absolutely dominated his opponent. At Bellator 251, he defeated Vinicius de Jesus via unanimous decision, and it was never close. It was Vanderford’s fourth win inside the Bellator cage, and when the inaugural rankings came out, he was ranked No. 3 in the division. Only Anatoly Tokov (29-2), John Salter (18-4), and champion Gegard Mousasi sit above him.

A win over Edwards will put him in the conversation for the title.

“I think it definitely puts me into consideration, but I think there are guys above me who, I would say, don’t necessarily deserve to be skipped over. I think John Salter has put in the work, and I think he’s pretty deserving of the title fight. I think John is another great competitor and I would love to compete against him one day,” Vanderford said. “Of course, if Bellator calls me and offers me the title shot, I’m not saying no [laughs]. I will fight for it soon, though.”

The undefeated fighter must get through Edwards first, however. He knows how good of a fighter he has in front of him Friday.

“Fabian is a very tough opponent. I think he’s very well skilled. He’s good everywhere. So,  it’s going to take me being on my game, but I’m going to go out there make it a gritty fight. I’m going to make it dirty, grimy, and, you know, we will test his will and test his gas tank.

We’re going to take him into deep waters. 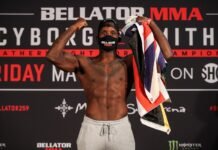