Bellator 259 has added a women’s flyweight preliminary fight, which will see Hawaiian sensation Sumiko Inaba return to the Bellator cage.

Cageside Press confirmed with promotion officials on Monday that Hawaii’s Inaba is set to return to action at Bellator 259, where she will battle New England’s Kristina Katsikis.

Katsikis who will be making her promotional debut in the bout.

Inaba (1-0) made her professional debut for Bellator in November of 2020. She earned herself a first-round finish via vicious ground and pound against Jessica Ruiz (0-2). The 30 year old prospect had an impressive 7-1 amateur career before turning pro in 2020. Inaba is one of the many highly touted prospects coming out of Hawaii of late. After starting her MMA career 1-1, she has won 6 straight including her amateur run.

New England native Katsikis is a South Shore SportFighting team member, who watched her teammate Johnny “Cupcake” Campbell win his Bellator debut last weekend. She’ll be making her first walk to the Bellator cage at the event. Katsikis is 1-1 as a pro, previously competing under the Massachusetts Cage Titans banner. Katsikis did not compete in 2020; her last fight was a win in 2019.

Bellator 259 takes place on May 21, 2021 at the Mohegan Sun Arena in Uncasville, CT. The card is headlined by a featherweight title fight between Cris Cyborg and Leslie Smith. 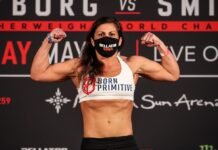 Bellator 259’s Kristina Katsikis on Inaba Fight: “I Can Finish Her”