Mix, whose lone loss came in his title fight against former champion Juan Archuletta, made it look easy against his last minute replacement opponent on Friday, Albert Morales. Mix was set to face Ireland’s James Gallagher, a fellow top five ranked bantamweight, but Gallagher pulled out. Interestingly enough, Gallagher was at Mohegan Sun for fight week, cornering his teammate James Queally. There is no love lost between the two contenders.

“He [Gallagher] has been here,” Mix stated. “He’s been DM’ing me all week. Running his goddamn mouth. I hope he signs the contract and actually shows up. He’s the only person I’ve ever seen to not come to school and try to play in the football game. He’s here at the event but he’s not scheduled at the event, it’s bizarre.”

Mix, a usual Jackson Wink MMA standout, trained under the Xtreme Couture banner for this camp. The magic of Eric Nicksick and company seemed to work wonders with Mix, who has felt he is now part of the team. 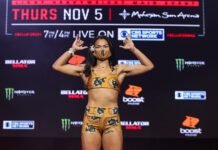 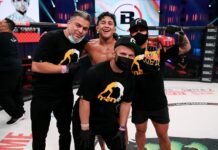