After what was a drama-filled end to Diego Sanchez’s time with the company that crowned him their first ever Ultimate Fighter, it left another veteran of the Octagon without an opponent. It seemed like Donald ‘Cowboy’ Cerrone was left in limbo without a fight, but Alex Morono stepped up to save the co-main event spot at UFC Vegas 26.

For Donald ‘Cowboy’ Cerrone, it was a role reversal of sorts as he has been known as the man to always step in and take a fight or two on short notice.  On Saturday night Cowboy was looking to get back into the win column as he has not had a win since May 4, 2019. Of course with Cerrone, fight fans know that win or lose, he always comes to fight.

Alex Morono stepping up was a very different fight, however. While it helped keep the card intact (multiple other fights were lost, which saw the ESPN event shrink to just nine fights), the Sanchez match-up favored Cerrone, while Morono was more of the question mark. Morono was looking to capitalize on the legacy Cerrone had carved within the UFC, to get back some winning momentum after his previous loss to Anthony Pettis.

Both men came out fast and furious. Alex Morono came out on a mission to finish Cowboy, and after landing numerous heavy shots, ref Marc Goddard had seen enough as Cowboy was taking too much damage. The ref called the fight off at 4:40 in the first round.

Check out how the pros reacted to the co-main event between Donald ‘Cowboy’ Cerrone and Alex Morono.

That was the best striking display from Morono I’ve ever seen. Clean and much more technical and precise. I thought Cerrone was gonna win that one. #UFCVegas26

The air in Houston just got a little bit sweeter with that @alexmoronomma win! HTX is celebrating for you tonight for that performance!!

Damn that was brutal!

Was that the last of cowboy?
If so thank you for all the great fights and memories. I remember watching him on the tapout show like 15 years ago! Helluva career!

Would love a rematch vs Cerrone #UFCVegas26

Cowboy is the man 👊🏿

“Don’t know what to answer you on, ‘Is it that time [to retire]?’ I don’t know. I don’t feel like it, but how I feel and how I perform are two different things, you know?" 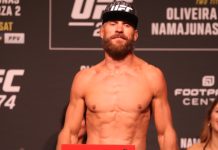 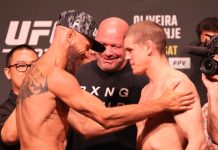