A top ten fighter in the promotion’s newly created rankings system, Lugo has his eyes on the whole division. And he’s calling for a shot at some pretty fun match-ups this summer.

“I want to get back in there late July,” Lugo told Cageside Press in a recent interview. “I finally feel like now I am ready to fight any of these guys. Anyone in Bellator in the top ten. Brian Moore is a tough fight, the guy ranked number 6, Leandro Higo, he’s a tough fight. Josh Hill is right in front of me,” Lugo continued. “Any of these guys 5 through 10, and 1 through 5, most of these guys are one dimensional.”

Higo was recently booked against former champ Darrion Caldwell. The rest of those names remain a very real possibility, however. Lugo feels he is finally hitting his prime, and at only 25 yet already 6-0, that is a scary thought for Bellator 135lb’ers. To hear him tell it, Lugo is ready to school anyone in the top 10, or even top 5.

“I always say this about everyone I fight, I don’t want it to be close,” Lugo stated. “I want to blow these guys out of the water, to skill these guys. You can’t find footage on me being schooled anywhere, you’ve never seen someone holding me down, schooling me on the feet. It’s not all hype, I’m like a chameleon, I’ll do what I gotta do to beat these guys.” 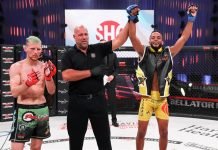 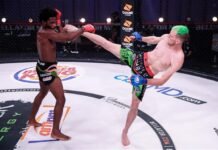