Bad blood was ready to boil over in the first of two bantamweight grand prix wild card fights at Bellator 278 on Friday.

The bout paired up Danny Sabatello and Jornel Lugo, and “The Italian Dream” Sabatello had done a whole lot of trash talking ahead of the bout. He certainly seemed to have Lugo’s attention, through whether it would throw him off his game remained to be seen.

It was Sabatello scoring an early takedown in Friday’s wild card fight, but Lugo was quickly back to his feet. Sabatello would quickly continue to apply pressure, however, latching on with a body lock and landing a wild takedown a moment later. Sabtello would get on top and stay there after a scramble, moving into half guard and looking to pass. He landed an elbow to the side of Lugo’s head, then added another one. Lugo scrambled up and out, only to be pulled back down.

From there, Sabatello would spend the rest of the round on top. There was little question as to who took the first frame, as Sabatello added more elbows, and briefly looked for a choke towards the end of the round. The pair had words for one another after the bell; perhaps that Sabatello trash talk was doing its job.

Jornel Lugo and Danny Sabatello exchange some words after round 1️⃣ 🗣️

Round two saw Lugo looking to land a knee early, but Sabatello once again had a takedown secured in the opening minute. Lugo made it back to the fence and briefly sat up, but before long, Sabatello had him flat again. This time, he sank in an arm-triangle choke, which Lugo just gutted out. He’d rolls and get free of the choke, but was soon eating ground n’ pound. Lugo ended the round bloodied and badly outclassed, but he did finish the round, earning five more minutes to flip the script.

Unfortunately for Lugo, it was rinse and repeat in the third. He was planted on his back early, and ate another serving of Sabatello elbows. Sabatello got creative, picking Lugo up and smashing him on his back, but Lugo reversed and escaped up. A small victory, however, and Lugo was soon put back down.

From there, it was all Sabatello. His wrestling was took much, the elbows were too damaging, and the best that could be said for Jornel Lugo was that he showed ample heart surviving to the end of the fight. Just a one-sided beatdown by Sabatello however. 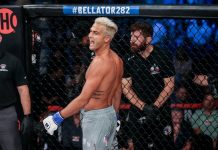 Bellator 282’s Danny Sabatello: Stots, Not Pettis, Is Champ, “I’m Going to Take It From Him”