The Professional Fighters League made their return to action Friday night, after sitting out all of 2020. Making a splash right out of the gate, PFL 1 for the league’s third season featured one of their biggest free agent signings: Anthony Pettis.

Pettis would make his debut opposite another former UFC alum and league newcomer, Clay Collard. The pair topped Friday’s card, which was comprised entirely of featherweight and lightweight action. In addition to Pettis, 2019 champs Lance Palmer (featherweight) and Natan Schulte (lightweight) were in action as well, against newcomers Bubba Jenkins and Marcin Held, respectively. Contender Series alum Brendan Loughnane, after winning both his non-tournament PFL fights last year, entered the season format for the first time, taking on former UFC fighter Sheymon Moraes at featherweight.

The action kicks off at 5:30PM ET, airing on ESPN2 and ESPN+ for U.S. viewers. In Canada, the main card can be found on TSN starting at 9PM ET. 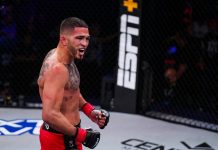