The pair first in 2019, when the light heavyweight champ moved up in an attempt to claim a second belt. De Fries (19-6, 1NC) retained, earning a unanimous decision win.

Since then, the English fighter has defended the title twice more. Now, the pair will meet again, with De Fries’ belt once again on the line. Ahead of the fight, he’s been training with some of the U.K.’s best.

While he’s always had great people around him, “it’s my first time going down to Team Kabon to train with Darren Till,” De Fries told Cageside Press ahead of the bout. “And Tom Aspinall is there.” The latter name will likely ring a bell with fight fans: Aspinall submitted former UFC heavyweight champ Andrei Arlovski back in February.

KSW heavyweight champ @phildefriesmma calling on the help of some of UK MMA’s big dogs ahead of his superfight at #KSW60 on April 24th.

When it comes to how De Fries sees the rematch playing out, there’s really one key difference he’s expecting from the pair’s first fight. While both men have continued training and progress, “it’s going to be very similar to the last fight,” De Fries predicted, “but I’m going to stop him this time.”

Despite already having a win over Narkun, De Fries isn’t too picky when it comes to challengers. “I don’t care, I’ll fight anyone. Anyone in the world,” he exclaimed. “I’ll fight whoever they give me.”

Of course, there’s the question, if he had his way, of who Phil De Fries would like to fight. Regardless as to whether they’re currently in KSW or not. On that front, there’s “any of the guys that beat me,” suggested De Fries. And another suggestion. “Some of the guys the UFC released, like Alistair Overeem.”

Overeem, along with former UFC heavyweight champion Junior Dos Santos, was recently handed his walking papers. De Fries wasn’t necessarily surprised to see Overeem and Junior Dos Santos released, given the losses that had piled up for them, and the price tag attached to the veteran fighters. The treatment given to them, especially Dos Santos, upon their exit — rather unceremonious, no public acknowledgement of their service — that was a little more surprising.

“He’s such a friendly guy, you know?” De Fries said of the popular Dos Santos.

Still, De Fries, perhaps better than most, understands that fighting is a business. That’s how he makes his living, and supports his family, after all, after over a decade in the sport. The recognition of the business side of things came with age, as wisdom often does.

“As you get older, your priorities change, you know? When I was younger, I wanted to be the best in the world,” stated De Fries. A world championship was the goal. As he spent more time in the sport, and frankly in life, it became more about security. And making money to support his family. Of course, now he’s got that world championship as well, in KSW.

Fatherhood was actually a big motivator on that front. His kids are what prompted De Fries to really give the sport another go. “I knew I could make money off this,” he stated, recalling his thoughts at the time. “I know there’s money out there, good money. Why aren’t I making it?”

With seven straight wins and four consecutive title defenses, De Fries seems to have it all sorted out. And despite the pandemic putting a damper on the past year, he’s got his family, his kids, to keep him positive. And if they were to want to follow in his footsteps?

“I’ll support whatever they want to do,” said De Fries, who at the same time noted he wouldn’t push them into it. “You don’t want your kids getting hit, you know?”

“I’m pretty sure if someone had pushed me towards being a lawyer or something, I might have done that instead,” he added. “But I was kind of left to my own devices.” 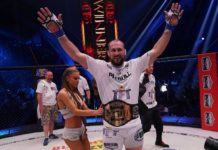 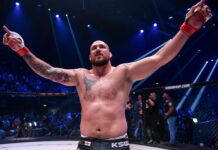