One side of the light heavyweight grand prix bracket is booked, with Corey Anderson meeting Ryan Bader. Nemkov’s side started with the champ lined up against Phil Davis on Friday. Nemkov defeated Davis for the second time, this time via a unanimous decision. A more definitive outcome, at least, than their 2018 fight, which ended in a split decision.

Now, the champ awaits the winner of Yoel Romero vs. Anthony Johnson, which is set to take place early next month.

Asked during the Bellator 257 post-fight press conference who he thought would win that pairing, Nemkov (14-2) replied that “both fighters are very unpredictable, they can strike or wrestle. I’m a champion, I’m ready for whoever wins that fight.”

Friday’s main event was Nemkov’s first title defense, and he displayed a very well-rounded game throughout the five round fight. Including landing a number of takedowns on Davis, on paper the better wrestler.

“That was our plan from the beginning,” Nemkov told Cageside Press following the bout. “We meant to steal the round at the end of the round, to take Phil down so we can win the round after.”

Nemkov, however, was definitely showing some damage following the fight, sporting a cut by the eye and several bumps and bruises. Still, he doesn’t see a problem being ready for the next round of the grand prix. 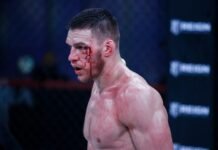 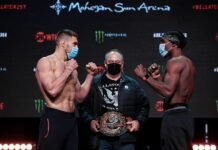 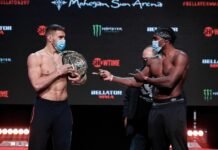