A pair of UFC welterweights will collide this June. Including a TUF winner.

MMA Fighting was the first to report the news that The Ultimate Fighter: Brazil 3 winner Warlley Alves will fight Ramazan Emmev on June 26 at a yet-to-be-announced UFC event. Both fighters would subsequently confirm the booking on their Instagram Stories.

Alves (14-4) returned in fantastic fashion early this year on ‘Fight Island.’ He finished hot prospect Mounir Lazzez in less than three minutes with a body kick. The TKO of Lazzez earned the Brazilian a Performance of the Night bonus. Alves had been out of action for 14 months prior.

Emeev (20-4) was also victorious on ‘Fight Island’ in January. A week before Alves finished Lazzez, Emeev defeated David Zawada via a split decision. The win was his second in a row and boosted him to 5-1 in the UFC. The Russian is a former M-1 middleweight champion. 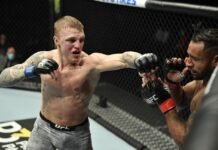 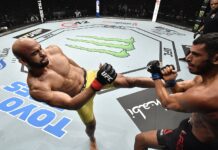