Vadim Nemkov makes his fifth walk to the Bellator cage this Friday at Bellator 257. Only this time, he does so as the reigning, defending light heavyweight champion.

Nemkov (12-2) faces Phil Davis in a rematch, a title fight that also serves as a quaterfinal match-up in the light heavyweight grand prix. The Russian beat Davis in the pair’s original meeting back in 2018, via a split decision. Since their first fight, the Russian would go on to finish Rafael Carvalho at Bellator 230 via rear-naked choke, and then last year in August, he would become the first man in Bellator to defeat Ryan Bader, winning the title in the process.

One thing is clear this time around: Nemkov does not want another split decision against Davis.

“I will try and finish Phil Davis as soon as possible. I want to make it fast,” Nemokov said during the Bellator 257 media day on Wednesday. “I want to put a big dot on our meeting with Davis [meaning an exclamation point].”

Nemkov will also be fighting alongside his older brother, Viktor, on the card. Viktor will be making his Bellator debut against Karl Albrektsson, who is also the last man to defeat the Bellator light heavyweight champion. It’s another key fight in Bellator’s solid 205lb division.

Vadim Nemkov will defend his light heavyweight belt against Phil Davis this Friday at Bellator 257. The event airs live on Showtime following online prelims available right here on Cageside Press. Be sure to check out Nemkov’s full media day appearance above. 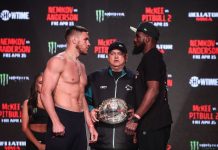