Kevin Holland jumps right back into the cage for a main event battle against Marvin Vettori in the main event of UFC Vegas 23. Cageside Press has its picks set.

Just three weeks ago, Kevin Holland saw his impressive run of victories come to an end against Derek Brunson. When a short-notice opportunity presented itself at UFC Vegas 23, he hopped right in to take on Marvin Vettori. Vettori is on a good run of his own, winning four straight fights including an impressive performance against Jack Hermansson. All but two writers picked Vettori

Arnold Allen returns to the cage in the co-main event against Sodiq Yusuff. Allen is undefeated since joining the UFC in 2015, winning seven fights with the promotion including two submissions. Yusuff is 4-0 in the Octagon with knockouts in two of those wins. Allen was slightly favored, receiving six of 10 picks.

Sam Alvey takes on Julian Marquez on the main card. Alvey is winless in his last five appearances with four losses and a draw last time out. Marquez has shown plenty of promise, knocking out Phil Hawes on the Contender Series and submitting Darren Stewart and Maki Pitolo in the UFC. Marquez was picked by seven of 10 writers.

A fun strawweight battle between Nina Nunes and Mackenzie Dern takes place at UFC Vegas 23. This will be Nunes’ first fight since the birth of her and Amanda Nunes’ child. She most recently had her four-fight win streak snapped by Tatiana Suarez. Dern, a jiu-jitsu world champion, has rebounded from a loss to Amanda Ribas with three straight wins including two submissions. Dern was picked by seven of 10 writers.

Mike Perry and Daniel Rodriguez open up the UFC Vegas 23 main card. Perry has been struggling, losing four of his last five fights with the lone win coming against the young Mickey Gall. Rodriguez is 3-1 in the Octagon, falling to Nicolas Dalby last time out. Perry was picked by six of 10 writers. 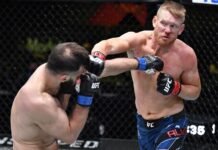