The Bellator 255 co-main event had something of a throwback feel to it. A welterweight battle between ranked 170lb’ers, the fight saw BJJ expert Neiman Gracie go up against Jason Jackson — whose advantage would clearly be on the ground.

The stand-up edge would go to Jackson, of course. Who would prove more well-rounded? Who would be able to force their opponent to fight their fight? Those were the questions surrounding what felt like an unofficial title eliminator.

Keeping the fight standing through the first minute was a win in itself for Jason Jackson at Bellator 255. He caught Gracie with a right hand, then appeared to have fended off a Gracie takedown. Even better, Jackson actually managed to get on top. Then, confusion set in.

Jason Jackson appeared to freeze, and Gracie was able to escape and take the back. Jackson could later be overheard complaining about his sight, but with the ref not seeing how the injury occurred, the fight was allowed to continue. A replay showed that Jason’s eye had been raked not by his opponent, but by the fence. The ref would eventually halt the action, and allowed the doctor to check out Jackson. With Jackson able to continue, the action was restarted in the same position, with Gracie on top.

Jackson, however, managed to reverse, and after landing a couple of blows, he wisely backed off. Jackson then landed a heavy takedown on Gracie, before pulling back. He added a calf kick; Gracie swung with an uppercut and missed by a country mile.

Round two saw Jackson land a sharp calf kick on Gracie, something he’d done several times in the fight. Gracie, however, mounted his opponent’s back standing, before Jackson broke free and reversed. That allowed Jackson to exit and move back to range. Gracie would get him down later in the round, but he couldn’t do much despite being right in his wheelhouse. Instead, they’d head to the third frame in a relatively close fight.

It was Gracie starting the third with a low kick, but Jackson’s answer a moment later was better. The repeated calf kicks were adding up on Gracie. The pair traded jabs early; Gracie added a spinning back kick, landing it a minute in. An eye poke by Gracie halted the action, however. When the fight resumed, a takedown would see Jackson land on top. The pair would go the distance, with Jackson taking the unanimous decision in the end. Post-fight, he revealed that following the fence incident in the opening round, his vision did not return until the third. 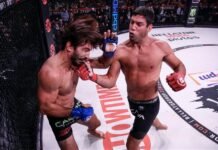 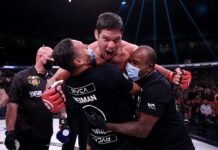