Shane Young is a 27 year old fighter that stands at 5’6″ and has a 72.5″ reach. Young fights predominately in the featherweight division, though in his last fight he competed in a catchweight bout of 150lbs thanks to his opponent L’udovvit Klein missing weight.

Young competed for the Vacant XFC Lightweight Championship over six years ago, which seemingly is his lone pro fight at 155lbs.

Young missed weight for his UFC debut against Alexander Volkanovski in 2017. It is worth noting that Young only missed weight by a pound coming in at 147lbs, but because he often uses his full allotted grace pound, he will be a fighter to watch when it comes time to weigh in. 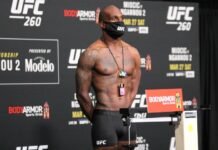