Las Vegas, NV — Former welterweight champion Tyron Woodley will be looking to pull out of a tailspin at UFC 260 this Saturday.

Woodley (19-6-1) has lost three straight, starting with the loss of his 170lb title to Kamaru Usman two years ago. That loss was followed by defeats to Gilbert Burns and Colby Covington, the top two fighters in the division outside of the champ.

In his last outing, it was Covington that dished out the loss to “The Chosen One.” Though an apparent rib/cartilage injury appeared to finally put Woodley away. With that in mind, it might seem surprising to see him back so soon. But speaking to media outlets at Wednesday’s UFC 260 media day, Woodley noted that “contrary to what a lot of people believe, I like to be active. When I was champion, me and Jon Jones were the only ones that had defended a belt four times in one year.”

“I like to fight, and once my body started feeling better, it was better for me to deal with the fights that happened before, than just crawl under a rock,” said Woodley. “I think a champion really comes back and shows you guys what he’s made of.”

He’ll show that against Vicente Luque, on the opposite trajectory — two straight wins. 8-2 in his last ten, the only losses coming to top welterweights Stephen Thompson and Leon Edwards. Woodley, however, has a different mindset heading into this fight.

“I focused on proving people wrong so many times in my career that it took away from proving people right,” he explained. “I’ve got 20 or 30 people I’ve got to prove right. Coaches, loved ones, kids, training partners, people that really supported me from the beginning. It’s millions of people you’ve got to try to prove wrong.”

What brought about this change? “For me, just re-focusing and just understanding that life is not always a straight path. It can be, but we make choices, and I made choices in my life that veered me off that path,” he continued. “Those are things that I have to deal with, and quitting is not an option. I’ve got to go out on top like I planned to do.” The way Woodley saw his future self when he was starting out in MMA, “it wasn’t losing to these guys. Though they were the champion, and #1 and #2, on paper, I’m a better fighter than all of them.”

Tyron Woodley faces Vicente Luque at UFC 260 on Saturday, March 27 at the UFC Apex in Las Vegas, Nevada. You can view his full media day scrum above. 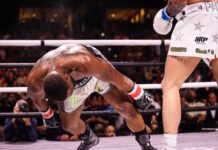 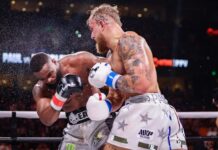