The much anticipated Bellator debut of Magomed Magomedov took place at Bellator 254, and his return was set for April 2’s Bellator 255, the promotion’s first event of 2021. Magomedov was set to face Jared Scoggins — however Scoggins was forced out of the fight.

Sources have subsequently confirmed to Cageside Press that Magomedov (17-1) will now take on CeeJay Hamilton. The fight will take place at bantamweight. Magomedov has won his last four fights, with his lone career loss comg to former UFC bantamweight champion Petr Yan.

Hamilton (15-7), a.k.a. “The Autobot,” is a Contender Series and LFA veteran who will be making his promotional debut in the fight.

Also being added to Bellator’s big return on April 2, the first card to air under Bellator’s partnership with Showtime, is Mukhamed Berkhamov vs. Herman Terrado. The bout was first reported by Vestnik MMA,  and has been confirmed by Bellator officials to Cageside Press.

Terrado (15-5-1) is a Bellator and Strikeforce veteran who was last seen competing for the PFL in 2018, where he lost to Jake Shields by unanimous decision. Berkhamov (17-1) has not lost since 2013, and sits on a 12-fight win streak.

Completing the Russian takeover at the Mohegan Sun on April 2, Bellator officials confirmed to Cageside Press that Khalid Murtazaliev (14-2) will make his much anticipated Bellator debut after a 1-0 run in the UFC. He steps in the cage against fellow debutant and a winner of nine straight, Brazil’s Fabio Aguiar (17-1). The bout is set to take place on the Bellator 255 prelims at middleweight. Murtazaliev exited the UFC after his win over CB Dolloway, and a USADA suspension that has since been served. He last competed in 2018.

Bellator 255 takes place April 2, 2021 at the Mohegan Sun Arena in Uncasville, CT. The card is headlined by a featherweight title fight between Patricio Pitbull and Emmanuel Sanchez, part of the promotion’s featherweight grand prix. 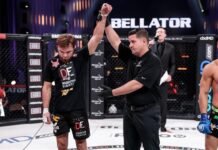