The showdown between promotional newcomers Cheyanne Buys and Montserrat Ruiz at UFC Vegas 22 on Saturday night was heated to say the least. Invicta alum Ruiz had promised a war heading in. Buys had suggested she’d already seen what Ruiz was bringing to the table. But it wasn’t until the end of the fight that some apparent bad blood boiled over.

Mexico’s Ruiz, who easily won the bout (via a unanimous decision) thanks to her takedowns, and practice of pinning Buys in place with a headlock, could be seen saying something to Buys at the end of the fight. Whatever was said, it was unclear — but Buys then gave Ruiz a shove before the pair were separated. Buys was also later overheard exclaiming “I’ll follow you home, b*tch.”

Buys later suggested in a post to social media that she had been spat on by her opponent. Something a number of viewers of Saturday’s main card fight also theorized might be the case. In way of evidence, she posted the video below, along with a brief message. “To all my friends and family, I am sorry for losing my cool after the fight. I have never in my life been spit on by an opponent I gave nothing but respect to.”

Montserrat Ruiz, not surprisingly, had a different take. Asked by MMA Junkie’s John Morgan during the post-fight media scrum about the incident, “Conejo” stated via translator that “everything got started when she insulted my wrestling and my takedowns. She said that I had stupid headlocks and stupid takedowns, and she said that she used to know me. So I proved to her that she didn’t know me, and I gave her a little help so that she could taste it.”

“I’m not the kind of person that likes to insult other people,” Ruiz continued. “I’m a homegirl, but if you touch the wrong buttons, you’re going to have issues with me.”

On the spitting front, Ruiz vehemently denied the accusation. “No I didn’t spit on her at all. Probably it was the momentum. I’m not the kind of person that likes to spit. If you spit on someone, that’s crossing the line, and that’s not something I was thinking about doing in my debut.”

Judge for yourself, but either way, it was a memorable debut for Conejo and Buys on Saturday. If not in the way anyone expected. 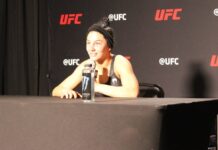 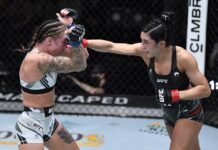