Polish heavyweight and former World’s Strongest Man Mariusz Pudzianowski returned to the KSW cage on Saturday, March 20. Still one of the biggest stars the promotion has ever seen, the 44-year old strongman was fighting for the first time since 2019 when he took on Senegal’s Serigne Ousmane Dia, better known as Bombardier, at KSW 59. Perhaps one of the few opponents that would outsize him.

While sporting just a 2-0 record in MMA, the absolutely massive Bombardier was a super heavyweight built like an action move henchmen.

Also featured on the KSW 59 card in Lodz, Poland on Saturday was bantamweight champion Antun Racic, defending his title against Poland’s own Sebastian Przybysz. Olympian Damian Janikowski was in action as well, as was former UFC fighter Darko Stosic.

Update, 3:00PM ET — just an hour out from the event, KSW officials announced that Bombardier was off the card, hospitalized with an acute case of appendicitis. Serbian sambo and judo champ Nikola Milanovic will step into the main event against Pudzianowski in his place. 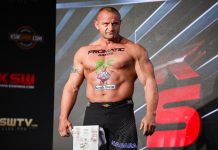 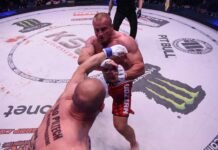