Song Kenan, like many other fighters (and everyone else, frankly), isn’t a big fan of the current restrictions put on him thanks to the coronvirus pandemic. In the case of Kenan, that’s the restricted Fight Week he’s currently going through ahead of UFC Vegas 22. Which means no going out and sampling local cuisine, for starters.

Asked for a prediction for the fight, the Chinese welterweight suggested that it “could be a submission, or maybe a full three rounds.” But if he does get the win, Song Kenan is hoping to be matched up “with more competitive fighters.”

While there will be no fans Saturday, next month, the UFC will head to Florida, for the first full capacity event since the onset of the coronavirus pandemic last year. Later in the year they are expected to head to Asia, and that’s something that appeals to Kenan. He would be “totally more excited if it’s in China and it’s crowded,” he said of the prospect of fighting at home. “They’re all fans that support you.”

As for the fight with Griffin, Kenan feels that his opponent “is also a very good fighter,” and feels that the pairing is “a very good match-up, and it will be a very good performance this weekend.” 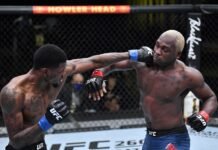