After challenging (and coming up short) for the UFC’s featherweight title over the weekend, Megan Anderson is no longer a UFC fighter.

While participating in a Twitch stream on Tuesday, Anderson, a former Invicta FC champ who joined the UFC in 2017, stated that she was gone from the promotion — as was the entire featherweight division. Reporter Drake Riggs was first to note the news.

Although the UFC later disputed that the division has been given the axe in a statement to ESPN, Anderson did reiterate that she is no longer with the company, having fought out her deal.

“Probably we’ll make more money outside the UFC,” she stated on Twitch.

Anderson (11-5) competed in the co-main event against champ-champ Amanda Nunes Saturday. She didn’t last long, with the consensus pick for women’s fighting GOAT submitting her in the opening round.

The UFC’s featherweight division has long been the division that wasn’t. At no point in its multi-year history has it had an official rankings, or more than six or so fighters. Originally brought in to build a division around Cris Cyborg, the UFC instead booked one-off fights in the weight class from time to time. Over the years, Holly Holm, Cat Zingano, and Germaine de Randamie — the UFC’s first featherweight champion — have competed in the weight class. More recently, double champ Amanda Nunes has been the star, with fighters like Anderson and Felicia Spencer also in play.

The only featherweight bout currently scheduled features Spencer against boxing crossover Danyelle Wolf, who has just a single pro MMA fight to her name.

Both Invicta FC and Bellator MMA have featherweight divisions, though in the absence of Anderson and Spencer, the Invicta 145lb weight class hasn’t been the most active. Cris Cyborg, who held 145lb gold in the UFC, currently holds the title in Bellator — which also boasts names like Leslie Smith, Julia Budd, Arlene Blencowe, Sinead Kavanagh, and Cat Zingano. 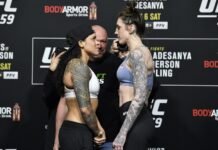 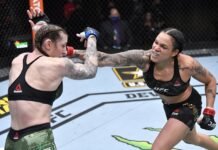 UFC: Costa and Cannonier to Return on August 21 in Key Bout