Marthin Hamlet is set to make his long-awaited PFL debut on Apr. 29 against DWCS vet Dan Spohn. The 29-year-old didn’t get to compete in 2020 as the promotion postponed all their events due to the pandemic.

“It was a little bad news that we can’t fight because we have a window in fighting that [closes] as we’re getting older,” Hamlet told Cageside Press. “But during that year I improved everything. So all in all, it was ok. Everything happens for a reason.”

Hamlet (6-1) seemed on the fast track to a UFC contract in 2019 after amassing a 5-0 start to his career. That was until he fought future UFC 205-pound fighter Modestas Bukauskas, who knocked out Hamlet in the fourth round at Cage Warriors 106. Had he won that vacant light heavyweight title match-up, Hamlet says would have likely competed on the UFC Denmark card.

“I believe that we [were] very close, if I got to win the title, I will be competing in Denmark for UFC,” Hamlet explained. “I won the three first rounds [against Bukauskas] and then I ruin it in the round four and I got TKO’ed. But I believe that loss came at the right time and I needed that to see I’m not ready for that big promotion. And as I said before, we’re finally here and I’m ready to go.”

Hamlet rebounded from his loss to Bukauskas later that year picking up a decision victory over Prince Aounallah at Superior Challenge 20, before signing with the PFL last year.

Meanwhile, Spohn (18-7) heads into this contest off back-to-back losses and will be looking for his first victory since August 2018. Prior to the setbacks, the 37-year-old amassed a six-fight win streak, including a TKO win over former UFC heavyweight Jeff Hughes.

While Hamlet isn’t overlooking his opponent, the Frontline Academy product believes he’s catching Spohn at the right time and is expecting another finish.

“I believe it will be a great fight, but to be honest with you … he’s 37 he’s, he’s on the end of his career,” Hamlet said. “I’m on the rise now, so I feel like I will end him in the first or second round. It will be good to pick up the three points for the victory. And three or two bonus points you know, to secure the quarterfinals.” 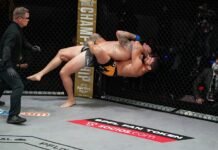 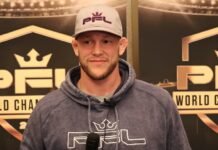