One of MMA’s top lightweight prospects will be making his return to action as Erick “Ghost Pepper” Gonzalez will headline the inaugural Naciones MMA event in Monterrey, Mexico against Oziel Rodriguez on March 19.

Best known for his time in Combate Americas, Gonzalez is a 10-4 pro who became one of the promotion’s winningest fighters.  His resume has seen him record victories over Danny Ramirez, Alejandro Martinez, and Won Sik Park.  He also went the distance in competitive bouts with newly signed UFC lightweight Rafa Garcia for the promotion’s title and Humberto Bandenay in the finals of a one-night tournament.

Besides Gonzalez and Rodriguez, the event will also see fellow Combate Americas veteran and inaugural Copa Combate winner Levy Marroquin take on Juan Pablo Mendoza.  “Goyito” Perez’s brother, Ivan Perez, will also be on the card as he takes on Emanuel Rivero. 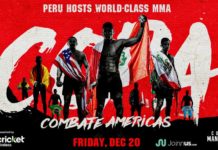 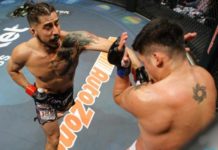