With rumors swirling for several days about Dan Hardy’s status with the Ultimate Fighting Championship, the former title challenger has finally opened up about the situation.

And for now, at least, Hardy is no longer part of the UFC. Though reconciliation may be possible.

Word of Hardy’s unceremonious exit from the promotion first began with a report by the Wrestling Observer Newsletter. Hardy then replied to a report by BJPenn.com that suggested a dispute with a female UFC employee was to blame.

“I am no longer working directly with the UFC,” Hardy stated on social media. “The ‘female’ part is irrelevant. It was a disagreement over an opportunity missed, or withheld, and I’d love some answers but can’t get any.”

On the official website of Full Reptile, Hardy’s own News/Media company, “The Outlaw” addressed the situation that had been brewing for some time, and kept him off UFC events since January.

Apologies for my silence on this current situation. I’m still chasing answers privately, and it’s taking some time. This is what I can say, at this point.

It was a verbal disagreement between myself and a member of the UFC staff. It was forthright but not aggressive, and specific to work.

I have apologized to the individual, for the embarrassment they must have felt, as a small handful of our colleagues from the British media were present. We were taking a brief break from recording UFC 258 content, a few hours after the Holloway Kattar event had concluded, when the disagreement occurred. The conversation could have definitely taken place in a better location, and under better circumstances.

BT Sport have not fired me, and are still keen on working with me in some capacity. I’m appreciative of their interest in a continued collaboration. Thank you all for the support in the comments across their accounts. They are paying attention and making efforts, although there is pressure to push me out entirely.

The Raptors were quarantined for three weeks in order to attend UFC 259, but had their credentials revoked, so we’re diversifying our content a little, and appreciate your subs and support.

It has been suggested that a reconciliation between myself and the UFC is possible, and of course, I hope that is the case. I have yet to speak to, or hear from Dana, and get a better understanding of his perspective on the situation.

The result of their brief and private investigation has left me with little closure, and hope that at some point I’m able to get more information of what I’ve actually been accused.

I’m forever a fan of the UFC, and dedicated in service of MMA. I appreciate all of your kind words and support, both privately and publicly, and have lots of exciting offers to consider.

With respect and gratitude,

Hardy has been known for his outspoken nature, and infamously engaged in a verbal confrontation with referee Herb Dean while on active duty as a UFC commentator last year.

A former welterweight title challenger, Hardy (25-10, 1NC) has not fought since 2012 after being diagnosed with Wolff–Parkinson–White syndrome. Of late, the British fighter has discussed returning to the cage, but no opponent or date appear close to being set — and this latest incident likely won’t help. 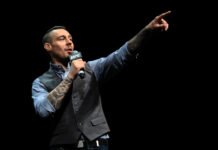