There are lots of top prospects in action this week on CFFC’s back-to-back cards alone! Plus Brave CF and more are in action. Let’s get on to this edition of the Weekly MMA Prospect Report!

The lightweight fighter from Kyrgyzstan has been fighting at a pretty high level. He’s on an eight-fight win streak with six finishes. Kubanychiev doesn’t have the prettiest striking but makes up for it with his pressure. He throws a lot of wild overhands and hooks to close the distance. He’s a decent wrestler. Kubanychiev isn’t much of a submission threat. He fights former UFC fighter Rolando Dy (14-9).

Kim doesn’t look much of a fighter but his resume says otherwise. On the mat he has some skills with three submission wins. He is better on the feet with his thechnical ability and pressure. Kim is constantly walking forward throwing crisp straight punches and hooks with his hands. He also has really good knees when he closes the distance. I still need to see more of him to label him as a top prospect but he’s worth watching. He fights Husein Kadimagomaev (7-0).

Kadimagomaev is a high-level prospect coming out of Switzerland. The young 21-year-old is training out of Allstars Training Center which has been red hot lately. As impressive as 7-0 is, Kadimagomaev went 18-0 as an amateur. He has heavy kicks, good combinations coming in, and has solid wrestling. At such a young age he’s already so well-rounded and already so good. He fights Tae Kyun Kim (7-0).

Almabaev has a background in freestyle wrestling, was a national champion in jiu-jitsu, and has a BJJ world cup. He’s on a current six-fight win streak taking out fairly decent competition. On the feet Almabaev is quick, he has good fast hands, and he throws a lot of volume with combinations. His takedown defense is his glaring weakness but his good BJJ bails him out of bad positions. He’s mostly well-rounded and with proven cardio, he’s a solid fighter. He fights Ryskulbek Ibraimov (18-8).

Abdulkhozhaev has just one loss as a pro; that was a little over four years ago. Now, Abdulkhozhaev is on an eight-fight win streak. On the feet, Anzor is a distance striker throwing at his preferred range. He throws a good one-two and good right hand. He frequently switches stances to give different looks. Anzor has some decent wrestling as well and has a dangerous guillotine choke. His takedown defense needs work though moving forward. He fights Nemat Abdrashitov (15-8).

I’m not sold on Singh just yet. Yes, he does have an impressive undefeated record but against low-level competition. Of the footage available, Singh is completely fine off his back. In fact, with nine submission wins most are coming off his back. Still so much is unknown about him. He fights Ali Guliev (5-0).

Nkuti may only be 2-0 as a pro but he went 5-0 as an amateur and won two titles as well. Also training out of Serra Longo he has a great team to build him as a prospect. On the feet, he has good hands but is wild in his approach. He’s a good wrestler and on the mat is where he’s comfortable. Nkuta is a strong positional grappler with dominant top control. Looks to be a solid flyweight prospect. He fights the champion Alberto Trujillo (5-1).

Kakharamonov is a solid prospect who has won the US open in Judo and is a multiple-time champ in Sambo. He had a few losses that set him back some but those were to Umar Nurmagomedov and Pipe Vargas. In his last fight, he got back on track knocking out Askar Askar who is a hot prospect. Many opponents have turned down Saidyokub and really, you can’t blame them. He fights Tycen Lynn (8-4).

Lynn made a name for himself in his last outing when he beat a good prospect in Phil Caracappa. Lynn has trained in taekwondo since the age of four and you can tell with his kicking attack in his MMA career. He wants the distance on the feet to let off his kicks. His takedown defense needs tons of work but is super dangerous off his back. Watch for his triangle choke cause he’s got a dangerous one. He fights Saidyokub Kakharamonov (7-2).

Tanner is a fun and exciting prospect to watch for. He excels on the mat, where he can showcase his amazing scrambling ability and his jiu-jitsu as a whole. To get it to the mat he features a stong body lock in the clinch and textbook wrestling — it is solid. Once he gets on top he has solid ground and pound. The times he’s gone to his back he has quickly reversed and scrambled on top. He fights Terry Bartholomew (7-3).

Mohammad Alavi has been very impressive in his short MMA career with a 100% finish rate. He has three submission wins and that comes from his solid grappling. More impressively, his wrestling is a very dangerous weapon thanks to his timing and ability to chain wrestle. On the feet, he likes to maintain distance with kicks and does have a dangerous left head kick he throws often, which has led to one knockout. Still young in his career, but someone to watch for. He fights Cody Barnwell (3-1).

Jeffery is one of the top prospects out of Canada. His two losses are to Brendan Allen and Sean Brady who are two UFC fighters looking great. The Canadian is a solid prospect at 28-years-old. Jeffery is comfortable on the feet with overall good boxing skills. He has a good jab and solid output with his hands. He’s strong against the cage with solid dirty boxing. Despite his output, he has excellent cardio. He fights Collin Huckbody (9-2).

We interviewed Jeffrey ahead of this one, be sure to check our conversation out here.

Green is a gritty well-conditioned fighter that fights inch for inch. Green fights a lot in the clinch muscling guys around, landing short strikes, and working takedowns. He is a good wrestler and has a strong top position. Green has some pop behind his hands and some technical boxing but relies on his gas tank and strength. He fights Yohan Lainesse (5-0).

Lainesse made waves in his last performance with a highlight-reel 14-second flying knee. I’ve been watching Lainesse since his days in TKO. I’ve had questions about his cardio in the past but he still is dangerous enough through the course of three rounds. Not many guys will make it to the late rounds with Lainesse. On the feet, he uses a lot of feints to set up the bigger shots. He is a decent wrestler and where he is best is on the mat. He’s a strong but fluent fighter on top. Lainesse has heavy ground and pound and transitions very well. Still, not where he needs to be but he’s on the right track. He fights Troy Green (4-0).

Lopes is a very talented fighter fighting out of Mexico. He’s beaten some good fighters like former UFC fighter Marco Beltran and TUF Brazil winner Rony Jason. Lopes is the reigning LUX Fight League champion. Lopes is a strong grappler with a jiu-jitsu black belt. He still needs to work of his striking but has a lot of good qualities. He throws a solid jab and a lead leg kick. Lopez is good at slipping punches and coming over the top with an overhand right. He’s also good at ducking under punches and getting the takedown. Lopes has glue-like grappling with dominant ground and pound and a dangerous submission base. He fights former UFC fighter Masio Fullen (14-7).

Vines is an unknown prospect but is a guy I have high hopes for. He’s very well-round and looks solid no matter where the fight is at. On the feet, Vines has solid hands firing from his preferred distance. He’s also good in the clinch with his knees. Vines may even be better when using his wrestling and when on the mat. Right away Vines has been easily moving into dominant positions and raining down ground and pound. He fights Jalin Fuller (4-0).

Colvin is only 2-0 in MMA but has an extensive background in jiu-jitsu. He’s been competing in jiu-jitsu for ten years, has been grappling all across North America, and is a BJJ black belt. In his two pro fights, he’s got quick takedowns and quick ground and pound stoppages. Still the best is yet to come as the cage time isn’t really shown just yet. He fights Obinwa Ikebunna (2-0).

Palancica is a young man out of Moldova who is a combined 13-0 in combat sports. He went 5-0 in amateur MMA and 1-0 as a pro boxer. He hasn’t fought competition at too high of a level, but he has looked right at home in his seven professional bouts. On the feet, Palancica is as talented as he is quick and really throws a good one-two. He does a great job striking and then changing levels and getting the takedown, as his wrestling is solid. He’s at his best on the mat as he thrives in the scrambles, and does a great job at transitions and getting into dominant positions. Palancica has fight-ending ground and pound as well. Overall, at 24 he has a good future. He fights Dmytro Predebaylo (12-7).

Nikolić’s main attribute is his solid jiu-jitsu. Even off his back, Nikolić is aware of what’s going on. He scrambles well and is good at making bad positions into good ones. He oftentimes transitions into the mount or to the back to later finish the fight. Nikolić has excellent ground and pound. He’s finished fights a couple of times with ground shots. When not getting the finish, he has at least used ground and pound to improve the position or get to a submission. Shockingly enough, Nikolić actually comes from some sort of kickboxing background. Not that his stand up is bad, per se, but his grappling is where he’s looked most comfortable before. I would like to see him cut the cage off more, but his hands are looking good. He throws in combos, and despite lacking power, he makes up for it in aggression. Nikolić has finished seven of his eight fights via submission. What he’s good at is attacking the neck, as he has earned two guillotines finishes and three rear-naked chokes. He fights Zhulduzbek Syimik Uulu (5-1). 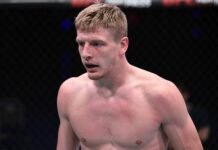