To kick off this week’s episode, Ashley Yoder stops by to discuss her upcoming bout with Angela Hill. The two were booked to fight a couple weeks ago, but the fight fell through due to COVID protocols. It was re-booked for this weekend’s UFC Vegas 21 card. Yoder chats about how that delay effected her, as well as how the bout came together in the first place. She also shares her thoughts of rematches and what she can glean from her prior contest with Hill in 2017.

Shockwave and Gumby would never let you down from the content you’ve come to know and love. They dig into this weekend’s card including the main event between Leon Edwards and Belal Muhammad. A weird road led to this one, but they’re going to take you through what to think of the match up, plus how to gauge the time off that Edwards has had. Plus, they’ll look at a pair of other fights on the main card, and of course give you the parlay to play and underdog to lay down on. Make your wallet as fat as a keyboard warrior this weekend with their advice.

Finally, Davey Grant joins Gumby to discuss his long layoff. Having last fought as the very first fight on Fight Island, he’s been away for some time. He talks about how he’s no stranger to long layoffs and how this is actually quicker than normal. However, normal doesn’t usually include him with a broken jaw, so he discusses recovering from that injury. Plus, the two, of course, get into his fight this weekend at UFC Vegas 21 with Jonathan Martinez and where he would get to with another big win.

You are not going to want to miss a second of this week’s show! 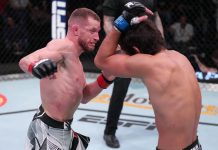