Known as “The Matrix,” Phillips landed a nasty head kick on the Chinese fighter early in the bout. Yadong, showing some grit, not to mention some chin, kept right on going.

“I hit him in the first with that right head kick, and I was like ‘damn, that guy took that shot.’ I thought it would have put him out,” Phillips said after the bout, which ultimately saw him win a unanimous decision. “And when he took that, I was like, ‘okay.’ It made me feel good inside. Because I was like, ‘I’m in for a fight.’ This is a top 15 guy in the UFC, the big show of my dreams. This just got real.”

It did get real. The pair threw down in a high-level bout that even caught the attention of former UFC interim lightweight champion Justin Gaethje.

Speaking at the UFC 259 post-fight press conference, Phillips revealed that he was further motivated, believe it or not, when he was hit by a couple of Yadong’s big right hands. “It’s good to get that type of fight, because usually I’m very technical, or I’ll try to take a guy out on the ground, or standing. So it was good to get one of those fights in there.”

What’s next for Phillips? That remains to be seen. “I’m going to the top, man. I’m going to go home and make some decisions, but I can’t wait to just keep working my way up.”

At 25, it would seem that he has time on his side. With his prime still ahead of him. “I like to think like that, as far as opportunity, and window of opportunity,” agreed Phillips. “But I also know, on the opposite end, it doesn’t really matter. There’s people that start in this sport late. But I know at this point in my career right now, there is no putting on the brakes. There is no chilling out, there is no going back.” 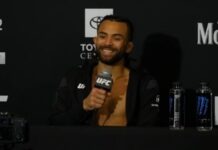 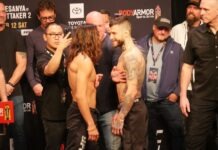 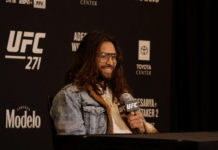