Las Vegas, Nevada — Trevin Jones earned his first official win inside the octagon at UFC 259 when he knocked out Mario Bautista early in the second round of their bantamweight affair.

The word “official” needs to be inserted into that sentence mainly because Jones’ first win, a Comeback of the Year effort against Timur Valiev last year, was overturned by the Nevada State Athletic Commission. Over something most jurisdictions as well as USADA are becoming more lenient on, if not doing away with entirely: marijuana use.

Still, that Valiev win is in the record books as a no contest. The Baustista win is official, however. And Jones showed that bantamweights can hit hard.

“Back when I wasn’t in the UFC I used to hear them say the 35’ers don’t have a lot of power,” he exclaimed during the UFC 259 post-fight press conference. “I’m just showing something new in the division.”

Jones (13-6, 1NC) saw the writing on the wall in the second frame. “Coming into the second round, he wasn’t moving the same no more. He was right in front of me, just like I like to fight — and that was a bad night for him.”

Moving forward in 2021, Jones is looking for “more wins man, more wins. Stay focused, like I was so focused for this fight. And I just want to win.”

He was also pulling for a post-fight bonus. “I hope I get that Performance of the Night, because I just want to get my grandma a house. If I get my grandma a house, I’m happy. And I can come out and keep putting on great fights for Dana White, and you guys. And that’s all I want,” he stated.

“My grandma took me and my brothers and sisters in when we were young and my mom passed away,” Jones continued. That saw the entire family move to Guam in the wake of Hurricane Katrina. “I just want to return the favor. I’m in the position now to be the first out of my brothers and sisters to return the favor. If I get her out of her little apartment, get her a house, my happiness goes through the roof, and I can come out here and fight unlimited for you guys.”

Jones did not, unfortunately, win a Performance of the Night bonus at UFC 259 in the end. But he’s back on the right track in his burgeoning UFC career. 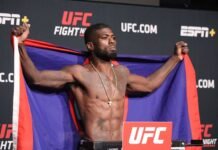 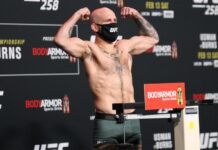