She did it against a former Invicta FC champion in Livia Renata Souza, en route to a knockout win in the opening round. After the victory, Lemos said she has more to show.

“It means a lot to me. I want to do a lot more, I can show a lot more,” Lemos said during the UFC 259 post-fight press conference. “But it does mean a lot to me to be recognized among those four.”

Alongside herself, the other female athletes to land two knockdowns in a single fight are Amanda Nunes, Lucie Pudilova, and Joanne Calderwood.

With a dominant win under her belt, Lemos (9-1-1) is hoping to return to action sooner rather than later. “One week resting, I’ll be back training. I want May or June, as soon as I can get back into the ring.”

Asked about the divisional rankings and breaking into the top 15, Lemos said that “I think I deserve it. I can do a lot more. I want to be able to show the fans what I can do so that I can keep on moving forward.” She’s shown a lot in her last three fights, with three straight wins, two via finish.

Lemos has a couple of names in mind for when she does break into the rankings. “I want to fight a top 10. Michelle Waterson and Angela Hill seem like good names.” 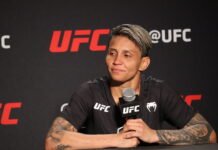 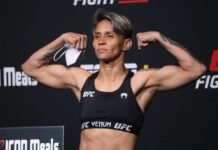