If you choose to believe UFC President Dana White, Khamzat Chimaev isn’t retiring after all.

Just hours after the All Stars Sweden team member made a social media post hinting at retirement as he continues to struggle with the effects of COVID-19, White gave a statement to MMA Junkie downplaying the issue.

“When he got here, the doctors took care of him, and they put him on prednisone, which is a nasty f*cking steroid,” White told the website. “So he’s on prednisone, and he’s supposed to be taking this thing and chilling, relaxing, and letting himself recover. He went in and f*cking trained today, felt like sh*t, and got super emotional and posted that.”

“He’s not supposed to be training, but you know, this guy’s a savage. He wants to fight like every f*cking weekend, and now he can’t even train, so he just got emotional and posted that, but he ain’t quitting.”

Prednisone is a corticosteroid which has proven to have anti-inflammatory benefits for patients suffering from COVID-19. At least one trial, The Randomized Evaluation of COVID-19 Therapy (or RECOVERY), has shown that mortality rates were lower in patients who received dexamethasone, another member of the corticosteroid family. Prednisone is offered as an alternative. White’s not wrong when he suggests prednisone is nasty: although common enough, the study also showed detrimental effects in COVID patients not on oxygen.

White also suggested to MMA Junkie that Chimaev could return to action in June. A June return date has been rumored in recent days, although the fighter’s ability to make it to the octagon three months from now remains to be seen. For starters, he’s going to need to take some time off from training, something he has been unwilling to do, it seems.

“He’s training when he’s supposed to be resting,” said White. “He’s got to stay off, at least while he’s on this medication.” 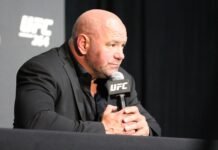 UFC 264: Dana White Confirms Poirier Up Next for Oliveira, McGregor to Have Surgery Sunday