A pair of lightweights will throw down in late February, as Thiago Moises (14-4) and Alexander Hernandez (12-3) have been booked opposite one another.

The lightweight pairing has been months in the making. Moises called Hernandez out at UFC Vegas 12, where both men competed. For his part, Alexander “The Great” later told the What the Heck podcast that he was game.

Referring to the match-up as a “super great fight,” Hernandez suggested that “I’ll take Moises out the start of next year and then probably hit one of these [top-15] guys again and just keep fighting.”

He’s got his opportunity to complete step one. MMA Junkie was first to report news of the booking on Thursday. Moises also confirmed that he had signed a bout agreement. The duo will meet on February 27.

Moises defeated Bobby Green at UFC Vegas 12 on October 31 last year. The Halloween victory was his second straight. Hernandez got the better of Chris Gruetzemacher that very same night, knocking him out within a round.

The UFC’s February 27 event is expected to be a Fight Night card, with a light heavyweight bout, Dominick Reyes vs. Jiri Prochazka, slated to headline. The following fights have been reported for the date, which does not have an official location or venue announced. 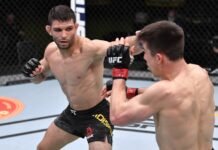 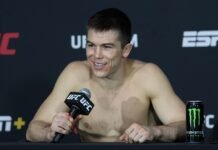 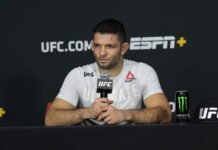