The last of seven newcomers on the UFC Fight Island 8 card, Belgium’s Gaetano Pirrello had drawn a very tough assignment in Ricky Simon. The bantamweight battle came on the preliminary porting of the Abu Dhabi-based event, and Pirrello entered, not surprisingly, as the underdog with the oddsmakers.

Pirrello, with strong support from Italy as well as Belgium thanks to his background, met Simon in the middle early. Simon was closing the distance with his right hand, and soon shot in for a takedown. The American wound up in half-guard, but before long, Pirrello had scrambled out. A big slam takedown followed with roughly two minutes remaining in the opening frame. Simon achieved some impressive elevation with that one, but again, he couldn’t keep Pirrello there long. Regardless, however, his control was winning him the round, and he would later take Pirrello’s back briefly along the fence. Transitioning to a takedown attempt, Simon landed a spinning back fist before re-initiating and landing the takedown.

Simon opened round two with a front kick then went back to the well and grounded Pirrello. The newcomer was slower to get up this time, and when he did regain his feet Simon was right back on him. The story of the fight was just that intense pressure from Ricky Simon. He controlled the pace, controlled the action entirely, and late in the second, get Pirrello down and moved to mount. Soon enough, he had an arm-triangle choke in place, forcing the tap.

Tapped!@RickySimonUFC gets the job done in RD 2️⃣

Simon had a neat little callout post-fight. “I’m on a quest to send Boom Boom Baggins back to the Shire. Brian Kelleher, Simon says business is booming!” 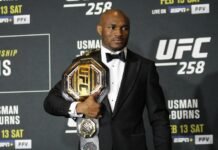 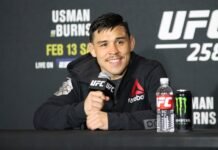 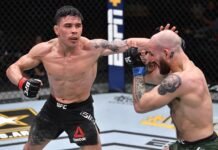