Agapova may have been on the wrong end of the 2020 upset of the year, but I don’t think that tells the whole story. Going into that fight with Shana Dobson there was tons of hype behind Agapova and rightfully so. Agapova is still just 23-years-old so very much still growing. If she can focus more and not get in her own head she’s going to be a huge problem in 2021.

Joe Solecki is one of the most underrated fighters in the lightweight division. He holds two wins in the UFC and earned his UFC contract on the Contender Series in 2019. He dominated UFC veteran Matt Wiman in his debut and submitted Austin Hubbard last August. Solecki is at least top five in the UFC’s lightweight division when it comes to jiu-jitsu.

Shore came to the UFC from Cage Warriors where he was their bantamweight champion. Both of his UFC fights, he’s found the finish by submission. In his fight with Nohelin Hernandez, he won a Performance of the Night bonus. It’s going to be interesting to see if anyone can stop the wrestling and the excellent jiu-jitsu of Jack Shore. Shore may just be Wales best hope of winning a UFC title one day.

Prior to signing to the UFC Muradov already had 28 professional fights. He beat Alessio Di Chirico in his debut. That was a slower fight but Muradov got back to his highlight-reel knockout ways when he stopped Trevor Smith in his last outing. Muradov didn’t fight at all in 2020 but was scheduled for four different opponents. Those being Jotko, Holland, Roberson, and Shoeface which all would have helped push his name forward with a win. He is set to fight Andrew Sanchez next Saturday which is a good test for him.

Nchukwi fighting on the Contender Series at only 3-0 shows that the powers that be expected a lot out of him. He scored a head kick knockout earning his contract and last December he went 1-0 in the UFC. Nchukwi beat Jamie Pickett which was his first fight at middleweight, moving down from light heavyweight. He’s got an exciting fighting style and has a personality fans and the promotion brass will like. 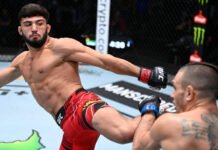